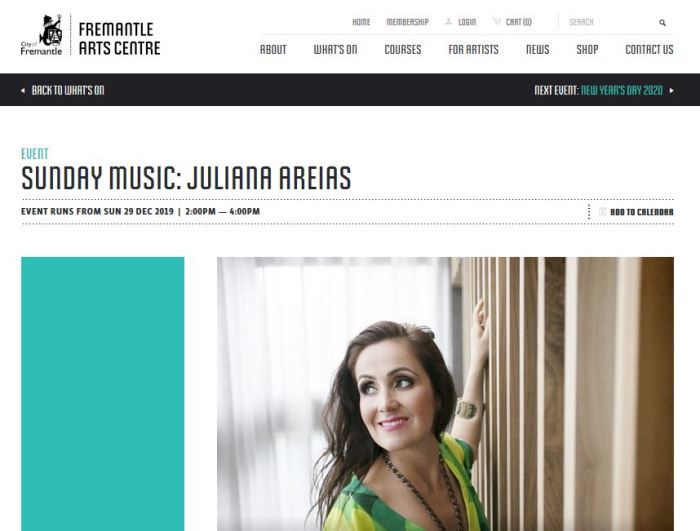 Perth-based Brazilian singer Juliana Areias ends 2019 on a high note, with an open air free concert at The Fremantle Arts Center – Sunday Music on 29 December after being the finalist of Western Australian World Award Best World Music Act 2019 and her debut album ‘Bossa Nova Baby’ had charted at #70 on the US Jazz Top 100, following her win of ‘Best Brazilian Music Album’ at the US Focus Brazil Awards earlier this year.

‘Bossa Nova Baby’ was recorded and produced in Perth with the support of the Western Australian Department of Culture and the Arts, and features some of Australia’s finest musicians, including seven-string guitarist Doug De Vries, bassist, arranger and producer Pete Jeavons, many jazz lecturers from WAAPA, and the late pianist and Perth jazz scene luminary Graham Wood.

Originally from São Paulo, Juliana has lived in Perth since 2007. Growing up in Brazil, Juliana was personally introduced to the Bossa Nova founders by legendary Brazilian Music historian and journalist Ruy Castro, and it was he who nicknamed her ‘Bossa Nova Baby’, which she would go on to use as her album title.

No stranger to international acclaim, Juliana Areias has performed around the world at iconic venues, jazz clubs and festivals such as the Sydney Opera House, Ronnie Scott’s Jazz Club in London, the Green Room in New York, the Fukiagi Hall in Japan, the Auckland Festival in New Zealand and the Beco des Garrafas in Rio de Janeiro, but she still calls Perth home.

Before she goes touring the globe again, you can catch her at the Fremantle Arts Centre – Sunday Music on December 29. She confesses – “It has been a long time dream to perform at the Fremantle Arts Centre Sunday Music Series, one of my favourite places in WA! I am looking forward to taking the audience in a magic journey to the sounds of the country of Bossa Nova, Samba and Carnaval – and at the same time celebrating life and the the joy of producing the amazing music fusion we create here in Western Australia!”

Sunday Music is FAC’s free weekly live music program. Enjoy the best local and touring bands every weekend in the beautiful setting of FAC’s Front Garden. Bring a rug and picnic to this family friendly event, or enjoy wood fired pizzas and drinks from our bar. Some chairs provided. Event Link: https://www.fac.org.au/whats-on/post/sunday-music-juliana-areias/

Article published by Around The Sound

WAMFest 2018 features a special event, as the team from the Canon Ball take over two stages at The Court Hotel.  In the lead up to the event, Around The Sound spoke to the originators of the Canon Ball, Addison Axe and Vanessa Thornton.

The first Canon Ball happened at Fremantle’s Buffalo Club on 10 March this year.  If asked, I would struggle to think of a gig that I’ve attended where the atmosphere was more welcoming, the sense of unity between bands and audience was greater and the smiles on people’s dials were bigger.  The Canon Ball was a salve for the wounds of a world weary of division — between genders, between cultures, between countries.  It was a uniting experience that left people wanting more.

The Canon Ball is happening again.  This time at WAMFest, over two stages at The Court Hotel on Saturday 3 November.  To let you know what to expect, Around The Sound spoke to Vanessa Thornton (Jebediah, Axe Girl, Tommyhwaks) and Addison Axe (Axe Girl, Tommyhawks), who founded the festival.

“The Canon Ball is an event put on by a collective of like-minded people reflecting all genders and identities.  It’s a celebration of female creativity, a carnival of the arts.  We welcome everyone,” says Thornton.

We’re really lucky that WAM (WA Music Industry Association) have let us run these stages for WAMFest, it’s great to have their support for this.  And The Court is a great venue, the performance spaces and the sound and lighting are just about the best in Perth.

“Yes!  That’s it!” adds Axe. “The Canon Ball puts on events where you can be just whoever you are, learn about other ways of being and have an awesome time while doing it.  We just want people to have a good time, you know, and to see what women can do in the music industry.  Not just the performers, but in all parts of the industry, staging, sound, lighting, security…everything it takes to put on a successful event.  And we want people to see it done in an ethical way, to be part of an event that tries to look after the environment as well as people.”

Thornton agrees, “That’s what we’re all about, having a good time, being good at what we do and doing good things.”

We’re all about goodness.”  Thornton says this last bit with her trademark wicked grin, while Axe just full on laughs.  They revel in their goodness, but they’re not aspiring to sainthood.  The Canon Ball is wicked fun.

“Yup, at the end of the day, we just want people to have fun,” Thornton adds.  “The bands at the Canon Ball, they’re not all women, but there’s at least 50 percent women in the bands, they’re female led.  It’s important to us to have that balance.  This isn’t about the gender divide, it’s about bringing people together and showing how the music industry really is.  There’s always been women in the industry, but we’ve been under represented a lot of the time, particularly on festival line ups.  I suppose, if we’re trying to put anything right, it’s showing that balance, and giving everyone a chance to see the awesome talent that women bring to music.”

“Yes!” Axe adds, “We want to run a festival that shows things how they really are.  That’s all.  We want to showcase all genders, all ways of being and the talent that people often miss out on, because there is still a bias towards males in music.  Not always, and things are changing, but there’s plenty still to be done.”

“And we want people so see the talent, to have a great time. Have we said that yet?” Thornton is smiling again and the partners in crime break into uproarious laughter.  They’re deadly serious, but they also get a giant kick out of what they’re doing with the Canon Ball.

WAMFest 2018 is a showcase of the massive talent that is the WA music industry.  Massive not only in numbers of artists and bands, but in the quality of original music that is generated across the state.  With free events taking place in regional areas as well as across Perth over 2 and 3 November, there’s a lot to take in.  We don’t really like to get all preachy here at Around The Sound, but WAMFest is one event you should take in.

Even it you don’t go to any other live music events this year, make some time for WAMFest.  You will be richly rewarded.

If you only get to one WAMFest event, and you really should go to more, make it the Canon Ball.  Having been to the first one back in March, we guarantee you’ll have a great time.  Here’s the line up:
Belle Harvey
FLOSSY
HUSSY
Intercontinental Sounds
Juliana Areias
Julie Kember
Legs Electric
Leopard Lake
Lucy Peach
Navana
nyanda j.
Racoo
RAKSHA
RTRFM 92.1 Drastic On Plastic DJs

Check out the Canon Ball event page here and get more information on WAMFest 2018 here.

The Canon Ball showcases women from different cultures, ages and walks of life and welcomes all identities, and genders to join together to rejoice and revel in the arts and creativity.

In a time when the politics of gender have become confusing and excluding of some identities and orientations, we aim to showcase and celebrate the best of female creativity to the whole world.  Come one come all and join us in this celebration.

Calling all bossa nova, chorinho and samba aficionados. Juliana Areias – Bossa Nova Baby is back after her inspiring tour to Brazil, the country of Carnival!

The Bossa Nova Baby show has been embraced by audiences across the whole of Australia, Europe and Brazil, showcasing contemporary arrangements of well loved bossa and samba standards – such as “Mas que Nada” and Jobim’s “The Girl From Ipanema”  – as well as Juliana Areias’s original songs from her multi-award nominee album “Bossa Nova Baby”  which has been featured on radio nationally and in Europe, Japan, the United States, New Zealand and Latin America.

Get ready for a sensuous night of fun, rhythms and beautiful music not to be missed, all to celebrate the Latin spirit of the Carnival Month!

– “It’s bossa that plays soccer with Jazz – as it has since the 60’s – and scoring a goal.  –  O GLOBO– Brazil– Antonio
Carlos Miguel – Music critic  and judge member of the “Latin Grammy Award”.

Inspired Brazilian singer Juliana Areias celebrates the mysteries of the night the Brazilian way, exploring for the first time the collective imagination of her own culture and its “darker elements”. From traditional Gothic lullabies, seductive vamp ballads, African slave chants, blues and rock magic portions, to evolving energetic samba spells, here is a night to have fun between fantasy and reality. Halloween dress is encouraged at this festival of fantastic creatures, tales, myths and songs!

“Sweet Vampire”, this concert is dedicated to you.