* Listen to SBS Radio  Interview  to Sydney, Melbourne, Canberra and Wollongong  (by Rui Bernardes in Portuguese). 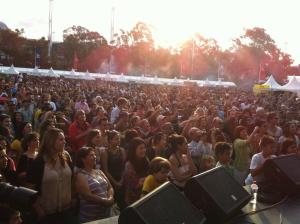 September 2011 – Perth is showing that it is a city that brings culture, art and people together all over Australia. This coming Sunday, 18th of September, some of Perth’s finest  world music  talents will be in Sydney performing at the Ritmo Brazilian Festival. Sponsored by the International Office of Edith Cowan University (ECU) and Oi Exchange;  Brazilian jazz singer Juliana Areias  and Marcio Mendes, Thiago Santos from Sambalicious  will step on stage to represent Perth’s culturally diverse music talent and encourage study at WA’s most vibrant university in Australia’s most exciting and liveable city.

The Ritmo Brazilian Festival is Australia’s biggest and most important Brazilian event. In it’s 12th edition, it is part of the annual events calendar of the Darling Harbour Foreshore Authority. In 2010, it attracted 30,000 people fulfilling its aim to promote the benefit and joy of diversity in Australian society. The event is an opportunity for people from all backgrounds to meet and have a fun day whist learning about Brazilian Culture.

Created by the not-for-profit organization BraCCA – The Brazilian Community Council of Australia, the 12th Ritmo Brazilian Festival happens this Sunday at the Tumbalong Park (Darling Harbour) and promises to be a fun day of free entertainment and another example of celebration of Australia’s unique cultural diversity.

Filled with music, dance and Brazilian cuisine, people from all backgrounds will join the party and be able to listen to Juliana Areias and Marcio Mendes in concert for the first time thanks to Edith Cowan University, OiExchange and Brazil WA.

Their repertoire is still a surprise, but the smoking musicians will certainly bring along with them the hottest and originally Brazilian moves and grooves from the sands of the beautiful beaches of the state that nurtures their talent, Western Australia. 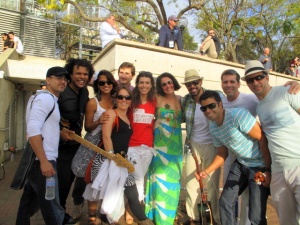