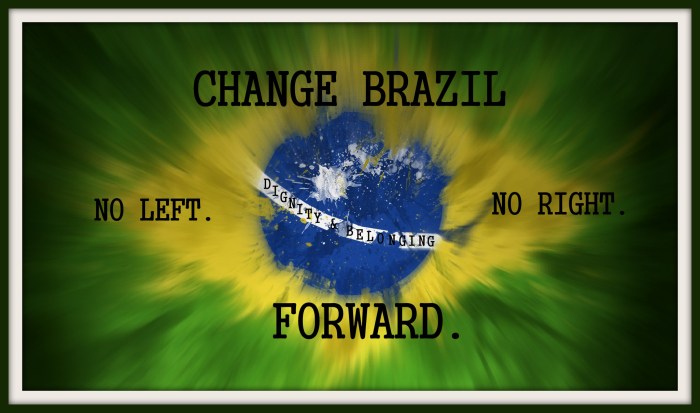 The City of Perth presents Juliana Areias –  Brazilian Experience show this Sunday 23 June 2-3pm at the heart of the City, as part of the Sunday Piazza Live Series  at the Northbridge Piazza ( corner of Lake St and James St).
When the concert was booked and nicknamed by the City of Perth more than 9 months ago to provide the audience with a stunning afternoon of classic and contemporary bossa, samba, fusion, originals and improvisations of Brazilian music –  nobody could have anticipated what would be happening in Brazil right now.
Since the 13th of June, social media networks have flooded with news about protests which started with the complaints about the rise of the bus ticket and have escalated to a horizontal and independent Brazilian movement claiming for general improvement of Brazil as a nation – with less corruption, less violence, more public health, access to education. Brazilians around the world have joined the cause and in more than 25 countries scheduled peaceful gatherings to express their solidarity and support to what has received an international nickname “#changebrazil”. In times when Brazil is in the limelight due to the World Cup and the Olympics, the Brazilian community in Australia has also decided to show that there is no apathy here. Sydney, Melbourne, Brisbane and the Gold Coast have organised peaceful marches for this week called Brazilian Awakening.
Here in Perth, it is no different. The Brazilian Awakening mindset will come with the audience of Juliana Areias free concert and they will sing along with their hearts to express through art and music their solidarity and love for their home country under the beautiful Perth sky.
As one of the  Brazilian culture Ambassadors in Australia, it is no coincidence that Juliana Areias supports the peaceful and artistic expression in Perth, as Juliana herself as a teenager and student happened to be part of the 1992 political  march led by the youth in Brasilia in 1992, later known as the “Caras Pintada” movement, and which culminated with the impeachment of the president Collor.
Wake up to sing with us. I hope you enjoy the experience…for a #change.
Sunday 23 June 2013 – 2-3pm @ The Northbridge Piazza ( crn Lake St and James St) Free event.. See Map
Band line up: Juliana Areias ( lead vocal), Marcio Mendes ( vocal/percussion/guitar), Adam Springuetti (bass), Tal Cohen ( keyboard) and Ben Vanderwal ( drums).
#changebrazil informative video
#changebrazil link for sharing:  http://www.youtube.com/watch?feature=player_embedded&v=AIBYEXLGdSg
Facebook event link: http://www.facebook.com/events/535224996513409/?notif_t=plan_user_joined

Today celebrating our love, our delicious life journey together... all we have already shared and all we have right here, right now and ahead of us! Thank you Meu Amor for making life extraordinary every day, for being this incredible human being and artist you are - the man of my life, the man of my dreams... so talented, intelligent, delicious, beautiful, inspiring, fun, profound, full of dignity, perspective and vision ... I could write here for years about all I love about you... yet no enough words to describe how much I love you. Since always and forever.... Te amo. #love #amor #loveofmylife #meuamor #iloveyou #teamo #julianaareias #geoffreydrakebrockman
Hello Berlin, Australia, Brazil, New Zealand, Japan, US and everyone who loves music around the globe! This Saturday Live Chat with my dear friend @adrianotrindadeoficial about how is to live and make Brazilian music overseas! We both dedicated our lives to it! We met many years ago at our beloved Aotearoa , New Zealand. It is going to be a delicious live, come and join us! Sat 19/6 - Brazil 11am / Berlin 4pm/ Perth 10pm/ Viva a Musica! #live #brazilianmusic #julianaareias #adrianotrindade #brazil #brasil #germany #alemanha #australia #bossanovababycd #bossanova #sambarock #brasileirospelomundo #musicabrasileira #musicabrasileiradequalidade #brazilianjazz
Thank you @cgsydney Consulado-Geral do Brasil em Sydney for being part of this journey by caring, supporting, creating opportunities and celebrating the beauty of Brazilian Culture, Music and Arts in Australia! Our culture and arts inspiring and opening new horizons! Viva a musica ! 😘❤️🎶🙏 #julianaareias #bossanovababy #vozdobrasil #brasilnaaustralia #consulado #sydney #brasil #brazil #australia #cantorabrasileira #cantorabrasileiranaaustralia #musicabrasileira #musicabrasileiranaaustralia #culturabrasileira #brasileirosnomundo #brasileirosnaaustralia #brasileirosemsydney #brasileirosemperth #mpb #soubrasileiro #gentequefaz #brazilianmusic #brazilianmusicinaustralia #braziliansinger #culturabrasileira #culturalatina #cultura