While finishing the production of  the Bossa Nova Baby Album, Juliana Areias prepares her last concerts of the year – as part of the “6 Continentes Festival“, on Saturday 6 December, and Summer Nights Show at the Ellington Jazz Club, on Friday 12 December. (Book now). 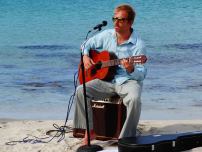 Juliana Areias’ “Summer Nights” show at the Ellington on Friday 12/12 presents summer songs composed by some of the greatest Brazilian composers including Antonio Carlos Jobim, Djavan, and Chico Buarque  –  Brazil’s most acclaimed lyricist who is celebrating his 70th anniversary in 2014. In this show, Juliana presents the Brazilian guitar player Eduardo Ruaro, who will be performing for the first time at the Ellington. The show also features Brazilian percussionist Sergio Maia and multi-instrumentalist Steve Searle on flute, sax, clarinet and trompete.

Juliana’s  first album will be released at the Ellington on Saturday, 7th February, 2015 and can be purchased  here.