Juliana Areias invites you to celebrate summer vibes Brazilian-style, and experience the magical cultural diversity that gives Brazilian Music its constant abundance of creativity and excitement.

Roll-up for an entrancing night of rhythms and sunny songs from the country of bossa nova, samba and carnaval with Perth’s own Brazilian singer-songwriter and USA Music Award winner – Juliana Areias, the “Bossa Nova Baby”.

This vibrant concert series will embrace Brazil’s most evocative rhythms and fusions – bossa, samba, baiao, choro, maracatu, Afro-samba, samba-jazz, samba-funk, samba-rock and samba-reggae featuring some of the finest Brazilian songs of all times.

From fresh arrangements of bossa classics such as The Girl from Ipanema, One note Samba, So Nice (Summer Samba) and Mas que nada to some of the most iconic songs of Brazilian Popular Music (MPB), as well as a few tunes from Juliana Areias’s award-winning album Bossa Nova Baby – the Summer Samba Sunday Sesh Series will make your heart beat stronger and your imagination fly high.

For these exceptionally colourful concerts, Juliana Areias has assembled a line-up of sensational musicians – showcasing the amazing talent and cultural diversity we are so lucky to have in Perth. Juliana Areias is honoured to share the stage with Joshua de Silva (seven string guitars /vocals), Paul Millard (sax/flute), Bronton Ainsworth (drums) and Rafael Medeiros de Souza (percussion).

The Juliana Areias – Summer Samba Sunday Sesh Series will happen on a Sunday in every month from January to April 2021, each time also featuring a unique Perth young talent as a special guest performing with Juliana in a particular nuance of the Brazilian Musical Spectrum.

Juliana Areias has performed on major stages around the world including the Sydney Opera House, Ronnie Scott’s Jazz Club in London, the Green Room in New York, the Montreux Jazz Festival in Switzerland, the Auckland Festival in New Zealand and the legendary Beco das Garrafas in Rio de Janeiro. Dubbed the “Bossa Nova Baby” by iconic Brazilian journalist Ruy Castro, her original album “Bossa Nova Baby” won “Best Brazilian Album” at the US Focus Brazil Awards in 2019 and spent five weeks in the US Top 100 Jazz Charts. Juliana has also been nominated five times for Western Australian Music Awards including Best World Music Act and Best Song.Now it is your turn to feel spellbound by the Bossa Nova Baby, Juliana Areias.

–“The idea of mixing styles and cultures is reflected in Areias’ life and her music.”, Daily Record – USA

–“Rhythmically perfect and passionate vocal delivery. The toast of the Perth Jazz Scene. The release of Bossa Nova Baby has elevated her above a mere covers singer or bossa specialist. The singer excels in an elegant co-composed duet (Belas Artes) with Australia’s finest Brazilian-oriented 7-string guitarist, Doug de Vries”

– ABC Radio National–“It’s bossa that plays soccer with Jazz – as it has since the 60’s – and scoring a goal.” 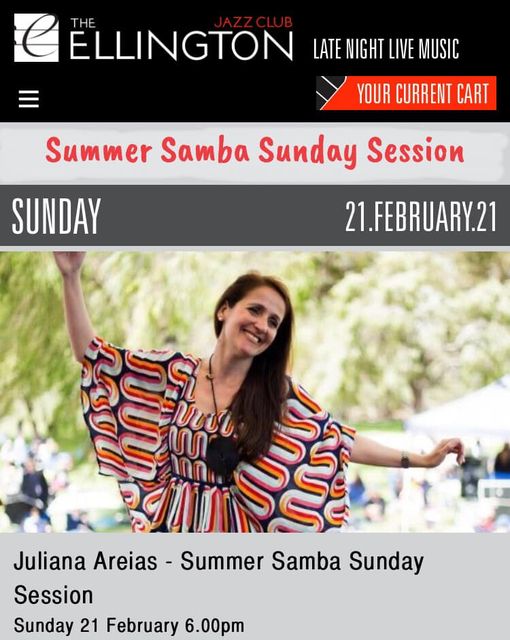