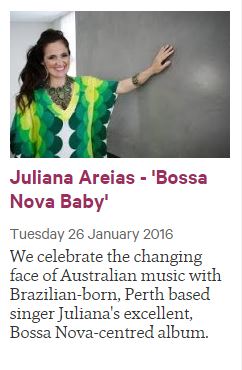 “We celebrate the changing face of Australian music with Brazilian-born, Perth based singer Juliana’s excellent, Bossa Nova-centred album.” – says Lucky Oceans, Grammy winner and presenter of Daily Planet Program at ABC Radio National, broadcast on over 260 frequencies around Australia, making it the largest single network in the country.

ABC Radio National’s choice is also in tune with Brazilian Calendar. While in Australia we will be on 26th January celebrating Australia Day –  in Brazil, it will be still 25th of January, Sao Paulo City Day ( the singer’s city), as well as the day Antonio Carlos Jobim was born and therefore now National Bossa Nova Day in Brazil.

No matter where you are , you can listen now to the show online.

While a teenager she was introduced to the founders of Bossa Nova by prize winning music historian and journalist Ruy Castro who also dubbed her the ‘Bossa Nova Baby.’ Juliana lived in Europe and New Zealand before moving to Perth, which she calls ‘one of the most inspiring, musical and artistic places I have ever experienced.’ The album is all Juliana’s compositions and co-compositions, played by Perth players plus Melbourne guitarist Doug De Vries in a few spots. We’ll also hear Brazilian sounds from Melbourne group Panorama Brasil and authentic Cuban Bolero sounds from Sydney c/o Gai Bryant’s new album ‘Palacio de la Rumba.’ And Australian transportation ballads sung by Bush Gothic and by Ewan MacColl.And there’s more Peggy Seeger and also Jarvis Cocker going all Brechtian on MacColl’s boxer ballad ‘The Battle is Done With.’

Having Trouble Reading Our Play-Lists?

Details of each track are presented in the following order:

Lyrics:
Crossroads, lights change
Going down under waves and waves of cars
Strangers staring through the windows of a world you left behind
Flowers by the Roadside

Flowers, easy to break, easy to make, one mistake that you can’t take back
Easy to be broken

He says, she says, they say it’s just the way we are
Hiding on the homefront
Black eyed susan in the boxing ring
Flower by the Roadside