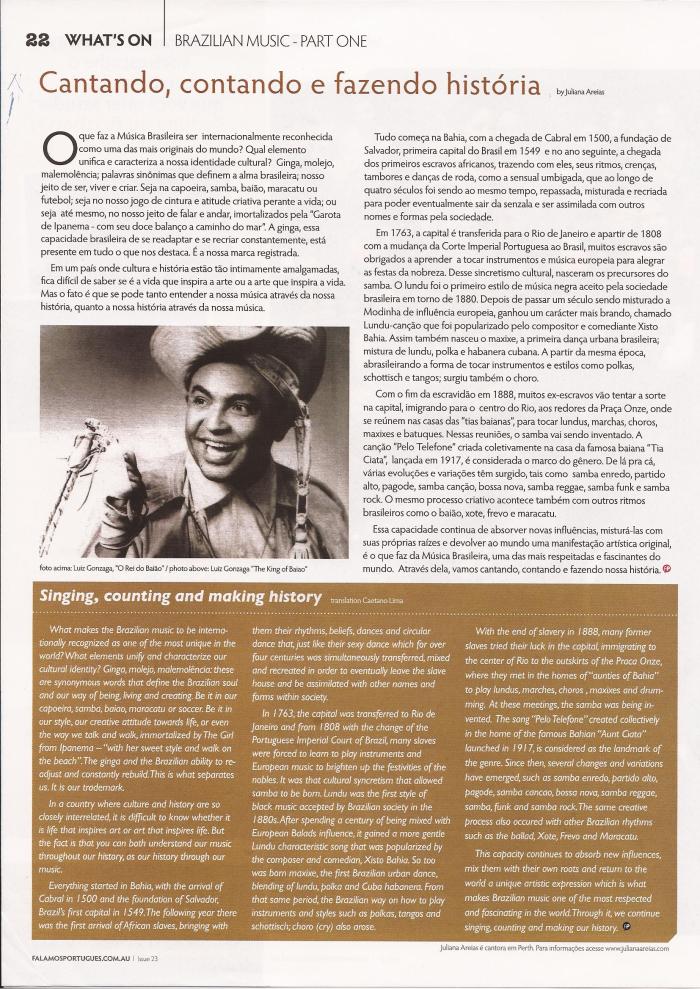 What makes Brazilian Music internationally recognised as one of the most authentic musical expressions of the world? Which elements unify and characterize our cultural identity? “Ginga, molejo, malemolencia”: these are synonymous words that define the Brazilian soul and the Brazilian way of being, living and creating. Be it in the expression of capoeira, samba, baiao, maracatu or soccer. Be it in our flexible and creative attitude towards life, or be it even in the way we talk and walk, immortalized by ” The girl from Ipanema” song: ” When she walks she’s like a samba that swings so cool and sways so gentle”. The “Ginga” is the Brazilian ability to readjust and constantly recreate. It is the Brazilian cultural signature, its malleable bilateral motion and spirit  present in the everyday life and all our forms of expression. It is what makes us always keeping in rhythm – no matter what. It is our trademark.

The cultural blending began in Bahia, with the arrival of the Portuguese Fleet led byCabral in 1500s with their first contact with the Native Brazilian  indiginous tribes and the foundation of Salvador City, Brazil’s first capital in 1549. The following year, the first African Slaves arrived in Brazil, bringing with them, their rhythms, beliefs, drums and their circle dance style, such as the sensual “umbigada” –  a dance in which two people meet in the middle of a dance circle and their belly buttons (umbigos) must connect. This “umbigada” dance evolved for over four centuries, being simultaneously learned, mixed , transformed and recreated by the new generations,  eventually leaving the slave houses and becoming assimilated with other names and forms within society such as the so called “chula”, samba de roda”  and “samba duro” from Bahia.

In 1763, the capital was relocated to Rio de Janeiro. From 1808 when the Portuguese Imperial Court moved to Brazil to scape from Napoleon, many African slaves were forced to learn how to play European instruments and European Music in order to intertain the nobles. This cultural syncretism process allowed the samba precursors to be born.  “Lundu” was the first style of African music accepted by Brazilian society in the 1880’s. After spending a century of being mixed with a European music style called “Modinha”, it gained softer characteristic that was popularized by a composer and

comedian known as Xisto Bahia. So too was born Maxixe, the first Brazilian urban dance, a blending of lundu, polka and Cuban Habanera. From that same period, the  “Choro” (or “Chorinho”) as a rhythm and style was created as a result of the Brazilian way of interpreting and mixing polkas, tangos and Scottisch rhythms.

With the abolishment of slavery in 1888, many former slaves tried their luck in the capital, moving from Bahia and  immigrating to the center of Rio de Janeiro to the outskirts of the “Praca Onze”,

where they met in the homes of the “Aunties from Bahia” to play percussion drums,  lundus, marches, choros and maxixes. During these meetings, the samba was being invented. The “Pelo Telefone” song, created collectively at the famous Bahian “Aunt Ciata”‘s home, was lanched in 1917 and it is considerated the landmark of the genre. Since then, several changes and variations of Samba have emerged, such as samba enredo, samba cancao, bossa nova, partido alto, pagode, samba reggae, samba funk and samba rock. The same syncretic creative process also occured with the development of other Brazilian rhythms such as the baiao, xote, frevo and maracatu.

This continuous capacity to absorb new influences, mixing them with its own roots and returning to the world an authentic artistic expression is what makes Brazilian Music one of the most respected and fascinating music of the world. Through it, we continue singing, telling and making our history.