(* Pre-booking available only for the 11/5 – As part of the Perth International Jazz Festival.  BOOK NOW )

Perth Jazz Society invited Juliana Areias to perform for four Sundays consecutively in May at the Laneway Lounge (41/4 A Murray Street, Perth City)

Pairing up with top local jazz musicians, the Brazilian Singer and songwriter, Juliana Areias, will present an eclectic repertoire that ranges from tunes influenced by Brazilian pop rock and French jazz. With her Brazilian jazz / bossa nova flair, this is an excellent option for a unique Sunday session accompanied by Perth’s most delicious top shelf cocktails.

For lovers of local jazz, one of the highlights of these musical encounters is the presence of one of Perth’s dearest jazz pianist, Tal Cohen, who is flying in from Florida to take part in the second edition of the Perth International Jazz Festival.

“I am looking forward to performing with Tal Cohen again. The sea connects people and not the opposite and this is the motto that will inspire our session. We aim to experiment with our own original songs, so we can expect the unexpected and this how we like our music.”, Juliana Areias.

Sunday, 4th of May

Juliana Areias – Pop bossa with Gus Potenza at Lane Way Lounge is a jazzy edition of Juliana Areias
Sunset Sessions at Floreat beach Kiosk. The guitar player and composer newly arrived in Perth from Brazil and brings to the table his Brazilian pop rock background from São Paulo.

The duo will be interpreting legendary songs from acclaimed artists and bands such as The Beatles and classics of Brazilian 1980’s rock in an easy listening bossa nova style.

Cohen who has relocated to Florida is specially returning to his hometown for the Perth International Jazz Festival. Having played alongside Juliana Areias for the past 3 years, this is the first time that they will be experimenting around their own original compositions together. An opportunity not to be missed!

Juliana Areias & Graham Woods, a major reference in the jazz scene in Perth. By far the best combination Perth can offer for interpreting the bossa nova classics of master Antonio Carlos Jobim. Challenge your ears and they will agree.

If Edith Piaf was Brazilian and Ca 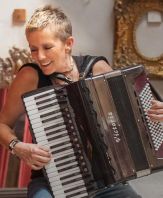 rmen Miranda French how would their music sound? This is the music mystery that this amazing trio aim to unravel. Exploring the French influences, Ray Walker (guitarist) has 50 years in the industry being one of Western Australia’s leading professional guitarists who has performed with musicians such as Joe Pisano and Cathie Travers with the charms of her impeccable accordion playing will perform alongside Juliana Areias. Join in! 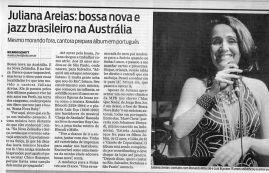 With over a year of consecutive sold out concerts around Australia, Brazilian Singer Juliana Areias, based in Perth since 2009 is already a reference in the local music scene and abroad.

Juliana was personally introduced to the Bossa Nova founders when she was a teenager by legendary Brazilian Music historian and journalist Ruy Castro who also named her “The Bossa Nova Baby”. This direct learning and unique experience have inspired her to become a professional singer. 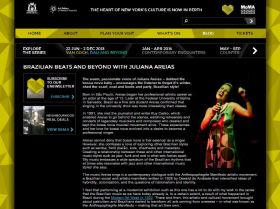 moving to Australia. Always working in the music circuit, her career includes performances at major international festivals such as the revered Montreux Jazz Festival, Auckland Festival, and American’s Cup (NZ). Most recent 2013 performances include the Inaugural Perth International Jazz Festival, New York’s exhibition “Van Gogh, Dali and Beyong” at The Art Gallery of Western Australia, and Ritmo Festival at The Darling Harbour, performing for over 30.000 people.

Juliana Areias has recorded for the poet, composer and 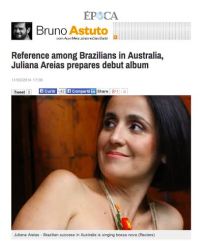 Juliana Areias music embraces several shades of the Brazilian music spectrum and its resonance upon jazz and other international musical styles.

Her authentic Brazilian voice, sense of groove, engaging charisma and a very personal and passionate stage presence are the trademarks of her work.